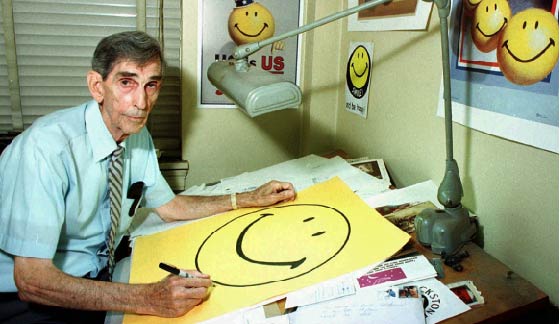 Inquiring in logos and brands that try to conquer us through positive messages, it seemed a good idea to honor Smiley in this case. Many believe that this is a simple vintage icon without any transcendence … but do you know the true story of this smiley face?

Back in 1971, Franklin Loufrani, a French journalist, created this simple concept for his newspaper, a happy icon would begin to be used to highlight the good news of the day. Following this invention readers could filter the news and read only the positive ones if they preferred it. It was then that the slogan “Have a nice day” was born.

Franklin was a cheerful and charismatic person who wanted to share his ideology with the rest of the world. “Focusing on the positive things in life is the best way to move forward.” He gave his icon the name of Smiley and patented it.

Years later, his son Nicolas was the one who made him a merchandising phenomenon around the world. He applied it in shirts, pins, buttons, posters and all kinds of promotional material always accompanied by a positive phrase to make known the identity and values of the brand.

Over the years the identity of the brand was reinforced to such an extent that it began to be considered not only an icon but a lifestyle. The brand was associated with the hippie movement of 1970, the house music scene of 1980 and the under movement of London.

At the end of the ’80s, the Internet revolutionized communication and Smiley was there from the beginning to appropriate this new trend. It was then when the enormous visibility of the brand began to be linked to the emoticons: faces used via emails or instant messaging programs by computer or cell phone. This new brand concept helped people communicate and express a full range of emotions quickly and easily.

Nowadays Smiley is a company that seems to expand towards the market of decorative objects and fashion clothing. The merit is that despite the brand’s trajectory and the diversity of business units it covers, its essence remains unchanged. The test is open to everyone because the vision of its founder and the mission of the company remains the same, making the world a happier place to live.

Smiley is undoubtedly an emblematic brand of this type of marketeo. In its brand image is closely linked to the promotion of happiness, positive thinking and originality.