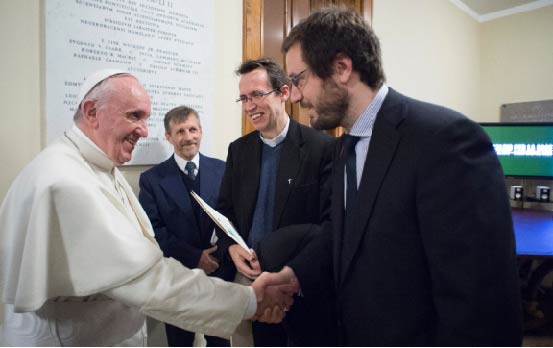 29 Feb “The Pope Video” will become teaching material in schools

Pope Francis received the agreement that establishes “The Pope Video” as a didactic material to educate children and youth. They were with the Pope, Fr Frédéric Fornos, sj, International Director of the Pope’s Worldwide Prayer Network (Apostleship of Prayer); José María del Corral and Enrique Palmeyro, directors of the Pontifical Scholas Occurrentes Foundation and Juan Della Torre, CEO of the La Machi Agency – Communication for Good Causes, the three institutions that sign the agreement.

“The Pope Video“ became official as teaching material and will be used in educational centers to strengthen spaces of motivation, creativity and understanding of the challenges of humanity that Pope Francis presents each month. The objective will be to capitalize the project and focus it towards a dynamic applicable to the path of Francis’ intentions.

The initiative created for the Pope’s Worldwide Prayer Network (Apostleship of Prayer), spreads a new vision and values towards a world “more respectful, with appreciation and that can only be generated in a childhood and youth involved in the faith and in hope, “according to one of the materials created for the workshops.

The signatories of the agreement expressed that “the educational facts are not only given in the school, but in different cultural areas, with their different modalities. The educational fact of construction also occurs in non-physical spaces that we can create at any time, place, in any language and counting on what surrounds us “.

The agreement seeks to promote the development of new convictions, attitudes and ways of life. In pursuit of a better world and that can generate in children and young people to think what kind of concrete actions can be undertaken to improve human relations. The material will be used in workshop mode, which will allow “The Pope Video” to function as a starting point for different activities, be they artistic, playful or recreational.

“The Pope Video” has been launched in January of this year as the new platform through which Pope Francis invites men and women from all over the world to join in their intentions for the challenges of humanity.

About The Video of the Pope

The Pope Video is a global initiative developed by the World Network of Prayer of the Pope (Apostleship of Prayer) to spread the monthly intentions of the Holy Father on the challenges of humanity. It has the support of the Centro Televisivo Vaticano (CTV), sole owner of the image rights of the Pope. Month after month he accompanies Pope Francis in his prayer requests.