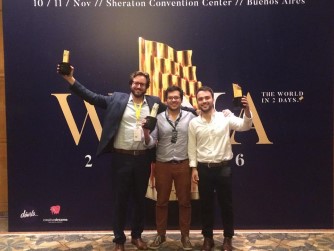 Buenos Aires hosted the first WINA awards, the global festival for advertising agencies or independent multinational networks. After the vote of more than 90 juries, La Machi – Communication for Good Causes obtained the Bronze Awards in Global Effectiveness, Bronze in Global Social Campaign and Silver in Global Campaign (the most voted in this category, since gold was not delivered), with the project The Pope Viedo of our client the Pope’s Worldwide Prayer Network.

The contest rewards the work and the quality of the actors of independent character that operate within the global advertising market, also known as indie advertising. Obtaining this WINA comes to La Machi Communication for Good Causes just over a week after winning the Mercurio International SME Award, from the Argentine Marketing Association, for the second year in a row.

“Winning a prize that recognizes the efforts of independent advertising has double value for us. Not only does it fill us with pride as an independent agency, but it also supports our vision that good causes are the true purpose of organizations. La Machi was born of a personal desire that has become a professional objective, and that is that good can be communicated well, “said Juan Della Torre, CEO & Founder of La Machi Comunicación para Buenas Causas.

The Pope Video has stood out for being the first spot in the story starring a Pope. Under a series of monthly viral videos, Francis invites to join in his intentions for the challenges of humanity. The videos have global reach, are published in 9 languages and already have almost 12,000,000 views and more than 3,000 repercussions in the global press.

The WINA festival seeks to encourage affiliation to associations and encourage the networking of the independent advertising industry from the local to the global. Its purpose is to scale the local and regional visibility to global, to give more value to the agencies in front of their clients, the market and the media.