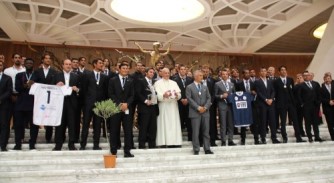 The III World Educational Congress of Scholas Occurrentes initiated yesterday. The Holy Father had a private audience with the top soccer representatives who committed themselves to the culture of encounter.

Pope Francis received the players of the Interreligious Peace Match that will be held at the Olympic Stadium in Rome and during the audience he inaugurated the III Scholas World Educational Congress that will be held until September 4 at the Vatican.

At the audience, which took place in the Paul VI Hall and lasted almost two hours, the Pope blessed the players, the trophy and the medals made by the Argentine goldsmith Adrián Pallarols. It was a very special moment, the Supreme Pontiff was very happy, he greeted each of the players and thanked the two organizations that promote the match: the Fundación PUPI of Javier Zanetti and Scholas Occurrentes.

During the audience, Francisco presented an olive tree of peace that was planted at the beginning of the party by leaders of different religions. At the end of the event in the Vatican, the Pope took a photo with all the players, including Diego Armando Maradona, who gave him a shirt.

In his inauguration message, Francisco said that “to play as a team you have to think, first and foremost, about the good of the group, not for yourself.” To win, you have to overcome individualism, selfishness, all forms of racism, of intolerance and instrumentalization of the human person “.

The Pope greeted the members of Scholas in the Angelus last Sunday and encouraged them to continue working in education. Starting today, participants from all over the world will gather in the Vatican to share experiences based on social inclusion and the culture of encounter.